Brace and secure all your important equipment:

Underfloor and Equipment Bracing are pictured below:

Being Prepared for Earthquake Activity is Important for Everyone

While the U.S. Geological Survey (USGS) reports that "Each year the southern California area has about 10,000 earthquakes", earthquakes occur in the central portion of the United States as well.

As recent as April 18, 2008, a magnitude-5.2 earthquake, centered 131 miles east of St. Louis, Missouri, shook southern Illinois. According to The Associated Press, people as far north as Michigan and as far west as Des Moines, Iowa reported feeling the quake.

The National Geographic News reported on the quakes that were experienced in the Midwest in 1811-1812, "Estimated at least as high as 8.0 on the Richter scale, the quakes were felt all the way from the Rocky Mountains in the west to the eastern seaboard, and from Quebec to Cuba. They briefly reversed the flow of the Mississippi River, created a number of lakes, and rang church bells in Boston. The earth shook so noticeably in Washington, D.C., that President James Madison and his wife Dolly thought the White House was being burglarized."

Earthquake Probabilities Throughout the Continental U.S.: 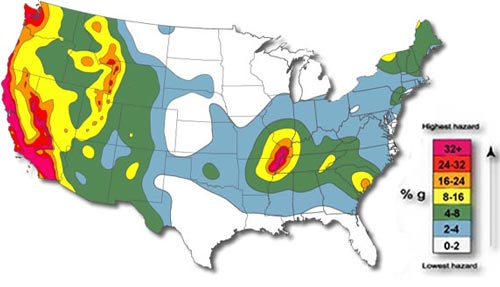 Visit the U.S. Geological Survey (USGS) for more information on earthquake probabilities and what you can do to be prepared.

Please contact your local Data Clean account manager for more information on a seismic solution for your environment.