When it comes to data center design, operation and optimization, it is all about power and cooling. Of course, the power supplied and the heat removed are closely related: in their simplest form, both are just measures of energy. Yet, it is often difficult to directly compare the two.

The challenge: power and cooling each have their own language. For electrical systems, we use terms like volts, amps, KVA and watts. When discussing cooling we usually talk in terms of tons and BTUs. So, while power and cooling are related, sometimes something gets lost in translation. When that happens, the results can be serious: from dollars lost through inefficiency to unexpected constraints on growth. Fortunately, there are a few simple tricks to quickly compare the power and cooling capacities within the data center. And, when compared apples-to-apples the results can be surprising.

What is the electrical load of your data center? The equipment nameplate is one possible place to start. On each piece of IT equipment (or in the manual) there will be a specified power requirement. This is usually given in VoltAmps (VA). You could count up and sum the power requirements for all the IT equipment. However, keep in mind the nameplate is required to list the maximum possible consumption (so wiring and circuit breakers can be properly planned). Actual consumption is usually much less, especially when averaged across all devices. A better-and often easier-approach is to measure the output power at the UPS or PDU. 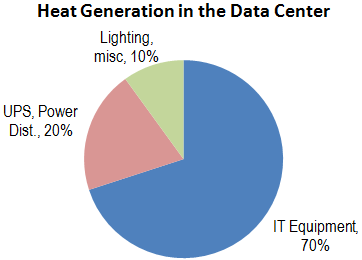 After a little investigation and some back-of-the-envelope calculations, we now know the heat generated in the room. For example, an IT load of 21 kW will use 21 kWh of energy each hour. This is only 70% of the total load. As a result, the entire room will generate 30 kWh of heat per hour. For most data center managers, this is where language breaks down: heat is something discussed in tons or BTUs. What does the number of kWh from the electrical bill have to do with the ton capacity of the CRAC unit?

BTU and ton are the most common terms used in heating and cooling calculations. Both are expressions of energy. As discussed above, kWh is also a measure of energy. Therefore, there is no reason cooling cannot be measured in kWh and IT energy consumption in tons! The savvy data center manager will be able to do just that. And, here is the key.


Now it is easy to compare power and cooling. Here is an example: A typical 5,000 square foot data center might have an IT load of 20W per square foot. This implies 100 kWh energy use for the IT equipment. Adjust for the other heat producing items (divide by 0.7) and the result it 143 kWh of electrical energy.